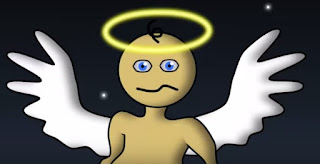 When presented together, the two propositions in this video are obviously silly, yet only one of them is recognized as such. Why? Perhaps it has something to do with how our standards shift when we’re dealing with reality as opposed to dealing with something far more fantastical. Perhaps it also has something to do with having a well established political and social system of norms and traditions backing up and perpetuating one of those silly propositions, often presented to us by loved ones when we were vulnerable children, or emotionally compromised by something.

Why do people accept such silly beliefs, but then live as though they don’t actually believe those things? Perhaps it’s because servitude to a lifetime of running from the whip, whilst chasing the carrot, is too exhausting. I tend to think it’s just not real enough for them, and they’re lying to themselves, a skin-deep lie, because they want it to be true. Maybe they don’t believe as sincerely as their facade makes it seem. After all, if I believed my existence in eternity depends upon what I do in this fleeting instant of a life, then my every waking moment would be devoted to that eternity. Yet that’s not what we see when we look at most believers. We see people standing in line at the bank. We see people sitting in traffic, suffering occasional road rage. We see people not concerned with eternity. We see people concerned with reality.

Email ThisBlogThis!Share to TwitterShare to FacebookShare to Pinterest
Labels: Religion